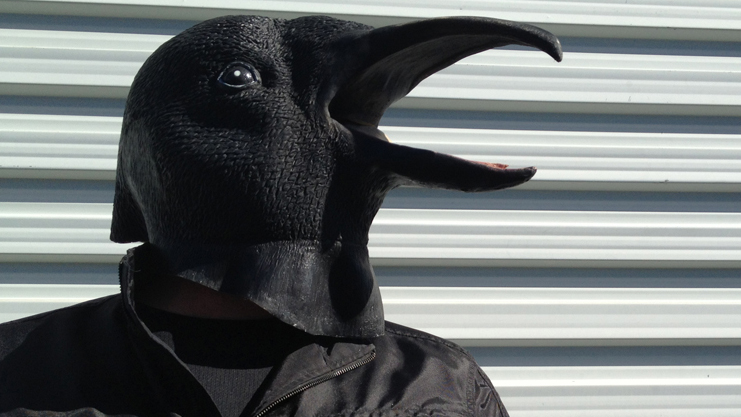 AMcE: For the unindoctrinated, you paint exquisite, caringly rendered bird portraits, and then name the works with far-out, darkly humorous, and deliciously irreverent titles. Sometimes the birds look as if they could be thinking the title line, and at other times they appear to be innocent pawns of the wicked word play.

I read that your titles incorporate themes of ‘drinking, insanity and death’ and your titles are the juxtaposition of ‘the purity of nature and the banality of the modern human experience.’ Has this approach changed over time and/or have you added any themes to the former trifecta?

Nature saved me during the initial shock of the pandemic. We were lucky to have acreage next to Joshua Tree National Park, and day after day all we saw was magnificent wildlife. Much of it, like bobcats, bighorn sheep, and migrating birds would come right up to the house. There was always something surprising and beautiful each time you looked out any window. I’m grateful to have had that experience during that time.

AMcE: Which begets what – title then the bird or bird then the title? Do you have titles that stick out as your personal favorites/s? What were the depicted birds?

MA:  I always paint the birds first, and then I’ll sit down and write the titles. Once I have the titles written, I’ll look at the paintings and see which title matches up best with a certain image. It’s usually pretty easy to assign the titles. I don’t know why, but I’ll look at a bluebird and think, ‘Yes, this title about Tokyo drifting in a mobility scooter works really well for this jaunty fellow.’

Some favorites include “The 56-Acre No-Kill Sanctuary For Oprah’s Ex-Assistants” with a pygmy falcon. I was an assistant for the movie director John Hughes, and it seems plausible that a no-kill sanctuary might be somewhere that assistants of famous people might be sent after they were no longer useful. I did a painting of a toucan titled “I Assumed Betting On Underground Amish Buggy Races Would Be Harmless Enough, But I Hit A Losing Streak And Now I’m In Deep With The Chinbeards.” In Southern California we have a lot of escaped pet birds that live in the wild, like the red-whiskered bulbul from India and noisy gangs of parrots. The title for my red-whiskered bulbul painting is “The Boy Detective Who Gave Up Solving Neighborhood Cases To Sit And Play Video Games In A Cloud Of His Own Stink.” I was a huge Encyclopedia Brown fan as a child, and as an adult I just think he never would have gone into the detective racket if there was an Xbox around for him to play.

Q. Are there any titles that you’ve come up with that you could not bring yourself to attribute to your lovely birds? And/or do you ever feel torn naming such lovely birds these untoward titles?

MA:  I was reading a few titles the other day and thought, ‘Whew, those are pretty dark.’ But they made me laugh out loud, which is why I write them. If I can make myself laugh with a title, I know it’s a winner. I have no problem whatsoever with any of the titles. The birds don’t care. Those little dinosaurs can take whatever title I saddle them with.

AMcE: Do you remember your first bird and its title?

MA: I think the first few that I did had titles like “Bird Number 7” or something like that, and I thought, ‘This isn’t going to fly.’ That’s when I looked at the title as someplace to have a little fun and where I could do some writing. I’m always writing in weird places, like painting titles and product listings on Etsy.

One of the first titles I wrote was “The Risk I Took Was Calculated, But Man, Am I Bad At Math.” That title attained internet immortality as a meme, and I still see it referenced randomly during my online meanderings, usually attached to some random image or character from popular culture.

AMcE: I know you travel to photograph the birds that you paint. Would you consider yourself a ‘birder?’ What is the rarest or most prized bird that you have spotted and/or photographed?

MA: I would never call myself a birder. I know birders, and even with my extensive years of study could never match their knowledge. My birding skills have definitely improved over the years, but true birders are incredibly impressive people, and very, very passionate about birds. Maybe in another 10 years I’ll feel confident enough to call myself a birder.

I hired a guide in Costa Rica, and he knew more about birds than I will ever know. As we walked through the jungle, he would abruptly stop and with one hand would throw open a tripod and put it down, and without looking, would point the spotting scope in a direction of a bird call. I’d look through and the bird would be perfectly framed. It was like watching a magician. Now THAT’S a birder. He showed me a resplendent quetzal, which doesn’t even look real; it’s like a living jewel. I still haven’t painted it yet, as I’m unsure how to even start.

AMcE: Do you have a current favorite bird?

MA: I’ve always been partial to goldfinches and their gorgeous, muted coloration, but I went to Africa right before COVID and saw a secretary bird in the wild. An absolutely incredible animal. There’s something about the combination of delicate grace and brutally murderous instinct that really appealed to me. It was a real honor to watch it hunt and kill a snake, so much so that I didn’t take one photo of it. I was too enraptured.

AMcE: You have contributed work to avian causes, such as the Puffin Project. Are there other support agencies whose work you would like to draw attention to?

MA: I’ve donated to the Audubon Society and the National Resources Defense Council, but I want to point out a great organization here in Los Angeles, the Moore Laboratory of Zoology. The Moore lab is at Occidental College, where Barack Obama attended for a couple of years. They recently refurbished their collection rooms, and I donated a painting to the lab. You can take tours of the collection and when they pull out a drawer of hummingbirds from around the world, it absolutely takes your breath away. It’s more beautiful than a drawer full of precious jewels; you cannot believe the range of iridescent color. Dr. John McCormack and his team have been kind enough to let me study and photograph these incredible specimens from the 1930s. It’s always an honor and a privilege to work closely with these preserved animals. If you’re in L.A., pay them a visit!

AMcE: When I queried a friend, who is a Matt Adrian/Mincing Mockingbird super fan, the one question she’d like to ask you, she wanted to know about your favorite author/s, commenting that ‘Matt has to be so well read to be that great at spinning words.’

MA: Wow. That’s a huge compliment. I do read quite a bit, though not as much as I’d like to. The writing of master graphic novelists like Ben Katchor, Chris Ware, Maira Kalman, and Daniel Clowes have definitely left their mark on me. For fiction writers, favorites include Cormac McCarthy, Larry McMurtry, Octavia Butler, Stephen King, T.C. Boyle, and Jim Harrison.